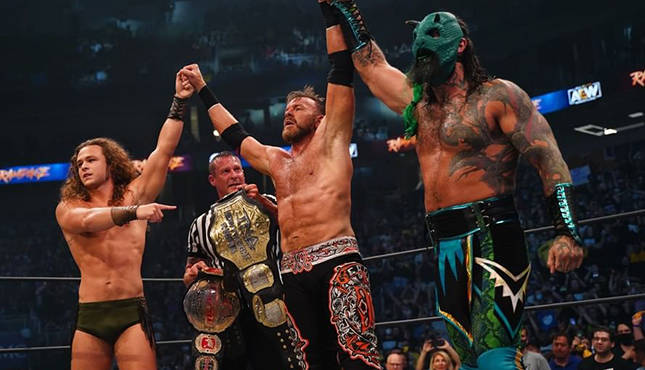 Happy Friday the 13th everybody!!! We’re kicking off Friday and the weekend in style as it’s the Series Premiere of AEW RAMPAGE! What an episode AEW has in store for us as opening the show will be Christian Cage vs Kenny Omega for the IMPACT WRESTLING World championship. Meanwhile in the main event, Britt Baker will defend her AEW Women’s World title against Red Velvet. Tonight promises to be a fast paced, energetic, and exciting hour so buckle up! I’m Lee Sanders by the way. Pleased to meet you…Nice to know me!

Nice rap intro for AEW RAMPAGE, short, sweet and to the point. Fired up crowd as they are full of energy! We’re at the Petersen Events Center in Pittsburgh, Pennsylvania greeted by Excalibur, Paul Wright, and Mark Henry but wait! We have a special guest commentator in Chris Jericho! The guys give us a rundown of the crowd for tonight as we are underway with entrances for Christian Cage and Kenny Omega.

White hot crowd as both men stand in the ring soaking it in as the fans are chanting AEW! AEW! AEW! Both men go for a lockup and come at a stalemate as referee Brian Hebner breaks them up. Cage gets Omega in a headlock and gets sent into the ropes. Omega thought he could get in some offense but Cage knocks him down and follows up with a middle finger. Omega now getting in a little bit of offense with a few slaps and chops. Tried going for the One-Winged Angel but Christian counters looking for the Killswitch but Omega pushes him off and runs outside the ring. Kenny gets back in the drivers seat only briefly as Cage and Omega keep going back and fourth trading chops and blows. Omega manages to push Cage off the top turnbuckle thanks to a distraction by Don Callis as we now go to commercial break. We’re now back as Christian connects with a snap suplex. Omega is raking Christian’s eyes as the ref starts to count him down to stop. Omega follows up with chops and punches as Christian is sitting on the top rope exhausted. Omega looking for a superplex from the top rope but Christian counters with a powerbomb. Orange Cassidy, Kris Statlander and the Varsity Blondes are shown sitting at ringside watching the action as the camera shows them. Back in the ring, Cage was looking for the Killswitch but Omega counters and sets him up for a pretty moonsault off the top rope. He tried looking for the One-Winged Angel but Christian counters with a DDT. Christian goes to one corner waiting for Omega to come through so he can spear him but Omega counters with a knee to the face! Omega follows up with a powerbomb and a running knee to the face for a near fall! One-Winged Angel attempt again but Christian fights it off. A great series of counters here as Christian wins the battle with a spear to only get a two count! Crowd is eating this up! Another snap dragon suplex by Omega as he tries to follow it up with a knee to the face. Christian gets outside the ropes teasing him as Omega takes the bait and pays for it followed up by a frog splash from the top rope for a near fall. Don Callis can’t believe it as he jumps to the apron to distract the ref. Omega capitalizes with a low blow to Christian. Young Bucks come out and give Omega a steel chair. Omega tries to look for the One Winged Angel yet again but Christian counters with the Killswitch! It connects as Omega goes head first into the chair and he goes for the cover…1…2…3! NEW IMPACT WORLD CHAMPION CHRISTIAN CAGE!!!! Jungle Boy and Luchasaurus come out to celebrate as we head into break. Great opener!

WINNER: Christian Cage
RATING: 7/10
THOUGHTS: Fantastic AEW RAMPAGE opener as I can’t stress it enough. Christian Cage and Kenny Omega have excellent chemistry together and I felt they held off just a little bit. That’s all good for me as I want them to go balls out crazy at ALL OUT. Omega within the last three to four months has been on a roll far as match quality which is making up for the sometimes odd promos. This was just a straight up entertaining, fast paced yet grappling kind of match. Their styles meshed well together.

AEW RAMPAGE continues on as Mark Henry is backstage with with Christian Cage getting his thoughts on how he feels as the new IMPACT World champion. He also wants to get his thought on ALL OUT match coming up for the AEW World title. Christian gives Omega props for being such a great challenger and champion but feels he’s in Omega’s head and that’s all he needs to ultimately take the AEW World title away as well. Video package shown of Fuego Del Sol and Miro’s upcoming match.

Fuego comes with the speed rocking Miro with a spinning DDT. Ref gets control and has Fuego go to his corner as he finally rings the bell. Fuego comes back at Miro hard and fast with another spinning DDT that sends Miro crashing outside the ring. Ref is counting down Miro as it’s almost a ten count but Miro gets back in the ring in time. Another spinning DDT by Fuego as now he goes to the top rope looking for a high risk maneuver. Miro grabs him mid-air and connects with a Samoan Drop. Miro sets him up for a side-kick to the face and then makes him submit with the Accolade to remain your TNT Champion. Oh and for insult to injury Miro tears up Fuego’s AEW contract as had Fuego won this match he would’ve gotten not just the TNT title but a AEW contract. Better luck next time bud!
WINNER: Miro
RATING: 4/10
THOUGHTS: I like Fuego as much as the next person and Miro has been on a fantastic role, no mistake about that. This was a straight up squash match however but at the same time I can appreciate the psychology of how this match was laid out.

We’re back folks as Fuego is pretty sad about what happened as he’s still in the ring. Sammy Guevera and Tony Khan come out as Fuego is stunned to see them. Sammy tells him how he’s been like 1-50 in AEW but that the people really love him. Smart move as the crowd chant Fuego’s name. Sammy tells Fuego that it was only right that Tony Khan has Sammy do the honors in telling Feugo that he’s ALL ELITE. Fuego is handed an AEW contract. Welcome to AEW, Fuego Del Sol! Jericho and the boys go over the rundown for key matches coming up on this week’s AEW DYNMAITE. So far we’re getting Young Bucks vs Jurassic Express for the AEW World Tag Team titles. In addition, Shawn Spears vs Sammy Guevera, also we get MJF vs Jericho. Finally, Sting and Darby Allin vs 2.0 as Sting is doing his first in-ring match on TNT as the cameras cut to high above the rafters showing Darby and Sting watching with curiosity.

Mark Henry is getting pre-match thoughts from Red Velvet and Britt Baker. Velvet talks about wanting to stir Britt’s ass up and ruin her night tonight as AEW Women’s champion. Britt tells her to stir that bleep somewhere else as she’s going to be still the champion and D-M-D.

MATCH 3: AEW WOMEN’S CHAMPIONSIP MATCH: Britt Baker(c) vs Red Velvet
Maaaaaaaan…Red Velvet getting no love tonight as she is being booed out the building. Britt Baker on the other hand is getting a hero’s welcome. You’d swear she won the Superbowl or something…

The girls lock up as Red Velvet has Britt in a locked hold for a brief moment. Red Velvet is getting the advantage of wrist holds on Baker as the two eventually stare each other down. Velvet had an opportunity to stomp on Britt’s wrist but didn’t do it. Britt shoots Velvet into the corner, Velvet comes back and is working on Britt’s wrist some more. Series of counters as Red Velvet gets the best of the exchange with a moonsault press to Baker as we head into our final commercial break. A commercial break? Really? Really? We’re back as Velvet tried looking for a big kick but Britt dodges it. Nice swinging neckbreaker by Baker who then goes for a crucifix pin but gets a near fall. Britt is looking for the lockjaw but Velvet counters as she’s on Britt’s injured arm. Rebel jumps on the rope as Velvet throws Britt’s cast in her face. Referee ejects Rebel who can’t believe it as Britt turns around to get dropped by Velvet with a superkick. Red Velvet follows it up with a moonsault to only get a near fall. Britt counters with a nasty brainbuster spike-driver for a near fall followed by a curpstomp. Red Velvet is still alive as she kicks out!!! Velvet manages to apply the lockjaw to Baker as the champion manages to counter applying the submission move. Velvet tries hitting Britt’s injured arm one more time in desperation as Britt counters back essentially by going southpaw with the lockjaw and submits Red Velvet! Britt Baker still your AEW Women’s Champion.

WINNER: Britt Baker
RATING: 5/10
THOUGHTS: A bit clunky in some areas honestly. The overall psychology was a little baffling if you’re a Red Velvet fan because we saw her jump Britt earlier this week on DYNAMITE. We then see her pre-match comments where she’s promising to spoil Britt’s parade a second time by taking away Britt’s title. Many times Velvet went after Britt’s injured arm but then other times she held back. Nice rebound though as the match continued as Red overall came out looking pretty good. Britt Baker on the other hand I must be honest as this wasn’t her best title defense so far. It wasn’t garbage by any stretch but at the same time it wasn’t OMG that was so good! What got this match over honestly was the crowd support in attendance tonight for Britt. Now Baker’s match with Nyla Rose recently? That was pretty solid but I must admit I’d love to see these two somewhere down the road as AEW has a good foundation here.

Great exclamation point by Baker as she continues her assault on her Velvet. Kris Statlander comes in and the two brawl for a bit but wait!!!! A mystery woman comes from out of nowhere attacking Statlander! It turns out to be Jamie Hayter who floors Statlander. We end RAMPAGE with Hater beating down Red Velvet as Baker and Hayter stand tall to send AEW RAMPAGE off the air.

Overall this AEW RAMPAGE episode went by extremely fast and reminded me a lot like the old ROH days to a degree. The white hot crowd tonight is what really kept my interest throughout the night and the tone that was set for ALL OUT, AEW RAMPAGE in Chicago next week was a nice touch. In addition, I love the fact that IMPACT WRESTLING has been getting so much love within recent weeks from AEW as remember early on it was coming off a little bit one-sided. What’s been happening with the IMPACT WRESTLING representation in crossing over on AEW programming has been a great step in the right direction. AEW made a fan out of me with this new installment and I hope in the weeks to come we get to see folks like Sonny Kiss, Nyla Rose, Jade Cargill and a few others featured frequently on AEW RAMPAGE.

Hey hey good kind people! Lee Sanders here and I’m back with you all once again. Solid card lined up...